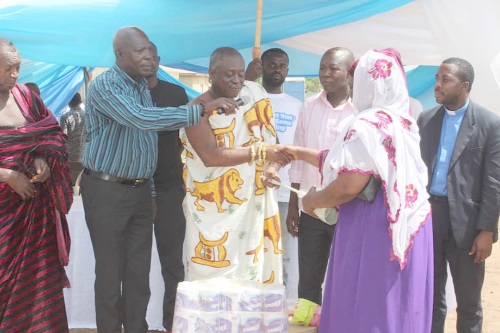 Barely three years after entering the sanitation industry with an aim to address the difficulty in acquiring toilets in the savanna parts of Ghana, Sama Sama, the WASH social enterprise established under iDE Ghana, is making commendable inroads.

The organisation which operates predominantly in the Northern and Upper West regions, with presence in other parts of the country has successfully delivered more than 6,000 household toilets, it also currently operates in 42 districts nationwide.

At a ceremony to mark the 2019 World Toilet Day on November 19, at Koase in Techiman, the Managing Director of Sama Sama, Mr Osei Agyeman-Buahin, in a speech read on his behalf, noted that although Ghana had to grapple with sanitation challenges, the last decade had seen the highest use of toilets, gradually eliminating the open defecation menace.

Sama Sama, he noted, could confidently say that it had contributed to this feat and although it came from a humble beginning when it started operations in 2016, three years on, the story was different.

“We are proud to be a leading force in this battle. Our journey started in 2016 with three districts in the Northern Region. Today, we have delivered more than 6,000 household toilets and operate in 42 districts nationwide.

We offer the widest range of quality household toilets. We also offer two years’ credit on all our products,” he said.

He added: “This means that you can own your own quality toilet with as little as GH¢40 per month,” Mr Agyeman-Buahin said.

In 2013, the United Nations (UN) declared November 19, as World Toilet Day and this momentum has been sustained over the last six years.

Highlighting the importance of the day, the MD of Sama Sama said “We know that sanitation is essential to health and that children under five are the most vulnerable to the effects of insufficient sanitation. Indeed, diarrhoea resulting from inadequate sanitation, water and unsafe hygiene practices kills one child every two minutes of every day.

The momentum for change has begun and we believe that within the next 10 years, open defecation will be eliminated for good.”

He also used the occasion to urge various districts and communities to play their part in the sanitation revolution to ensure that children survived and countless women did not have to suffer constant and recurring indignity it is also to ensure that no one was left behind iwhen it comes to access to quality sanitation.

The Koasehene and Mawerehene of Techiman Traditional area, Nana Opoku Ofosu Gyeabour, emphasised the importance of having toilets in every home, explaining that the attitude of some Ghanaians who built homes without toilet facilities was bad.

He, therefore, urged them to desist from this habit, adding that most of the illnesses that people acquired was as a result of poor sanitary conditions.

Nana Gyeabour also expressed his satisfaction with the Sama Sama flush toilet, especially the off-set pit technology which allows for flushing of the toilet with a small amount of water thereby removing odour and creating a conducive environment for families who use this type of toilet.

He also said he was impressed with the low cost involved in acquiring the facility.

A representative of the Municipal Chief Executive, Mr Charles Acheampong, lauded Sama Sama for partnering the assembly to eliminate open defecation in Techiman as well as other parts of the country.

He said the assembly was committed to give Sama Sama the needed support to achieve the objectives of eliminating open defecation in Ghana.

A top toilet business owner (TBO) of Sama Sama, Mr Jibril Fuseini, who is also the owner of B.A. Fusieni Moulding and Block Works Industries in Techiman, was excited about his partnership with the company.

He said through that partnership he had been able to expand his business to include toilets.

The expansion, he said, had also enabled him to employ five workers and to learn a new technology about how to build pour flush toilets.

Arsenal’s unbeaten record with Bukayo Saka comes to an end |...