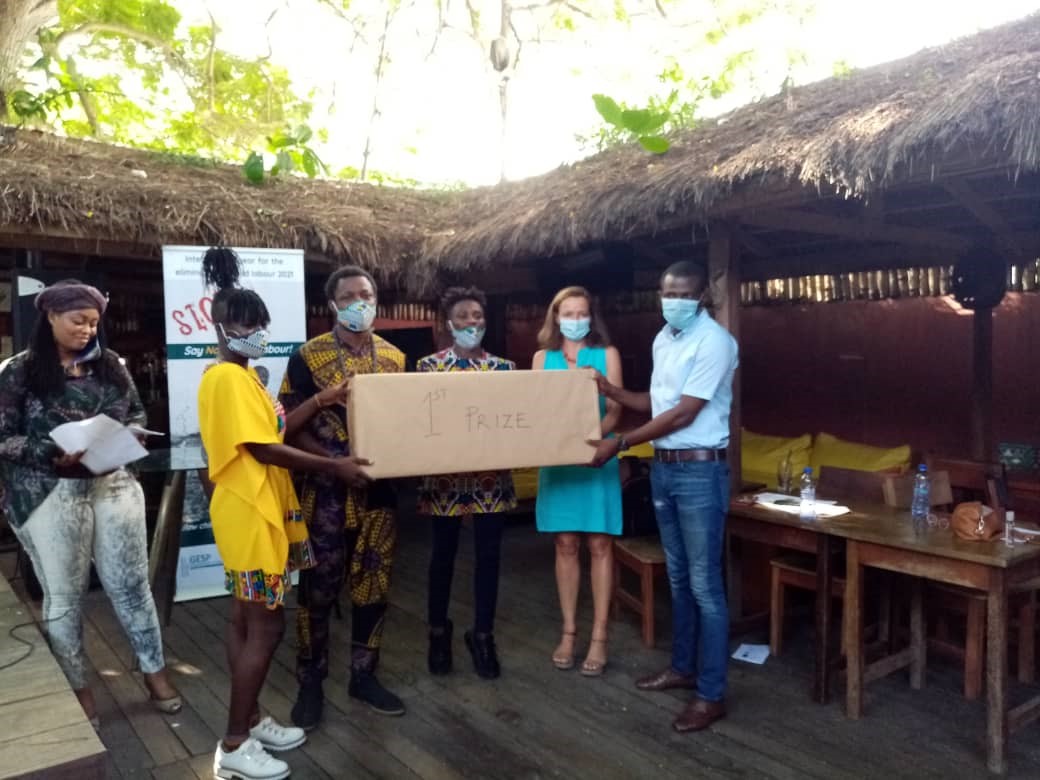 Budding young Ghanaian musicians, Kwame Brenya and Kpodo, have been adjudged the overall winners of a song contest organized in support of the global fight against child labour, with a beautiful composition titled ‘Abofra.’

Abofra narrates the difficulties some children experience at the hands of their parents or guardians in their failure to comply with their laborious instructions either at home or at work.

For their prize, the duo was given a brand-new piano, and will be expected to compose the theme song for next year’s European Union (EU)/Ghana Employment and Social Protection (GESP) campaign against child labour.

The United Nations has declared 2021 as the International Year for the Elimination of Child Labour. UN member states are charged to take immediate and effective measures to eradicate forced labour, end modern slavery and human trafficking and secure the prohibition and elimination of the worst forms of child labour and by 2025 end child labour in all its forms.

The European Union fully supports the global fight against child labour and, in Ghana, the EU Delegation, through two CSOs projects and the Ghana Employment and Social Protection (GESP) Programme, has also committed to contributing to combatting child labour.

EU/GESP will launch a campaign against child labour during the first quarter of 2021. It is as part of the preparations of the campaign that the song contest was launched in August 2020. At the launch, Ghanaian musicians were invited to submit a song, themed around child labour in Ghana, which received overwhelming response with over 50 song submissions.

These were put up for public voting during the months of September and October 2020, and generated an impressive 875 votes from 20 different countries across the globe. The public vote identified one winner per song category, in the four categories – Category 1: Traditional, Ethnic, Classical; Category 2: Gospel, Jazz, Blues, Folk; Category 3: Highlife, Hip-hop, R&B, Soul; and Category 4: Pop, Rock, Electronic.

These four category-winners were the finalists for a final vote by a jury, which included Ghana’s Afro-pop singer and song-writer Wiyaala. Wiyaala has also volunteered to act as goodwill ambassador during the 2021 campaign against child labour in Ghana.

Head of Governance, EU, Maria Trongoso, said the European Union was happy to be supporting the global fight against child labour through civil society organisations and commended the GESP Programme for embracing the campaign. She disclosed that the EU was executing other projects across the country as part of the campaign and that one of such interventions was in fishing communities in the Volta Region.

Head of the Human Trafficking Project, Ministry of Gender Children and Social Protection, Abena Annobea Asare, said the fight against child labour was for all and urged parents to protect their children against any form of abuse in the society. She said the Ministry had trained over 70 traditional leaders in communities to be ambassadors of child protection and hinted that government will roll out more programmes in 2021 aiming at eliminating all forms of child labour.

US recovery looks shakier with unexpected rise in jobless claims

“I am no rush to sell Matthew Cudjoe, I want his...

No consensus reached after 5 hours deliberation at crunch IPAC meeting

Coronavirus: Trump says US reopening ‘vaccine or no vaccine’ – Ghana...

Contractor for Boankra Inland Port to be unveiled on Friday –...

‘A careful balance of many factors led to lifting of partial...