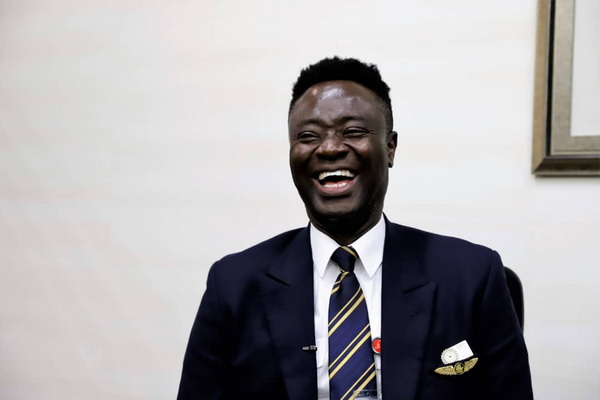 Sometimes we tease each other and my friends call me a bus driver because I fly the Airbus A380, Captain Solomon Quainoo, the only Ghanaian pilot currently flying Emirate’s double-decked jumbo jet, the Airbus A380 quipped.

He was responding to a question during an interview, on how flying the big passenger jet was being viewed by fellow Ghanaian pilots flying the Emirates airline’s aircraft around the world.

Captain Quainoo became an instant star when he flew the largest passenger plane currently flying – the Airbus A380, to Ghana on October 2, 2018 in a one-off flight to commemorate the opening of the Kotoka International Airport’s Terminal 3 facility.

One of four Ghanaian pilots currently with Emirates which is headquartered in Dubai in the United Arab Emirates, Captain Quainoo’s climb into the A380’s cockpit as a captain, however, did not come on a silver platter.

In an encounter with some selected Ghanaian journalists who were on a four-day tour of Emirates’ facilities, he recounted how his dream of becoming a pilot almost fizzled out because of some encumbering circumstances.

Aspiration
Although since the age of six he always wanted to be a pilot and indeed used to dress up as a pilot wearing gloves, things did not really go the way he envisaged.

“From a very poor background and a family of six we used to live in one room and didn’t have any money but I dreamt and aspired to be a pilot,” he said.

According to Captain Quainoo, it was with that dream in mind that he tried to get into the Ghana Air Force, as he believed that was the only way that he could actualise his dream because he did not have the money required for the training as a pilot abroad.

“At the time I needed about £60,000 to £70,000 for my tuition fees alone and I didn’t have the money to do so, but after I missed the air force experience, I thought to myself, why me because I passed all the assessment; why now?

He said he was taken suddenly ill when it was time for him to do the medicals to be enlisted into the Air Force and so he missed that appointment.

But he didn’t give up and instead he went to the university (University of Ghana), did his first degree and went to the UK to do his masters in aerospace engineering, after which he got a job with British Airways as a design engineer.

Second time unlucky
“So, I worked as a design engineer for some time and through their sponsorship scheme they were going to sponsor me for pilot training and then 9/11 happened and they cancelled it,” he said.

“But I said this is my time, I am going to be a pilot, whether I have the money or not,” a determined Mr Quainoo told himself.

He applied for career development assistance from the banks and a bank manager agreed to give him a loan (under a British government loan scheme) to advance his career but when the time came for the training the bank manager said he was no longer going to give him the money.

“So on the day we were meant to report for training I drove there and told them that I did not have the money so I was not going for the training but they gave me my uniform, my bag and course materials and I told them look you don’t understand but they said we will talk about it later.”

He ended up not paying fees for the first nine months in training apart from his deposit of £1,500, although they were required to pay about £15,000 every three months.

However, after some back and forth with his bankers – the HSBC Bank, he was able to complete his ground school as the second best in his class, then moved on to the United States for his first three months of flight training, Captain Quainoo said.

Joining Emirates
“When I joined Emirates we had a tour and when we went to the engineering part we got to the hanger and as soon as we got into the plane I went to sit on the captain’s seat (I wasn’t a captain then, I was on the 330 which is a smaller airbus). I sat on the captain’s seat and I said I will be here one day,” he reminisced.

Sharing his experience on the A380, Captain Quainoo, who joined Emirates in 2011 and moved to the airbus A380 in 2013 said; “When we take the 380 into the air it is like taking a town because the number of passengers we carry sometimes outnumbers the villages we fly over, so it’s just an unbelievable experience and huge responsibility knowing that you have more than a village in your hands to take care of.”

The pilot who has already done over 14,000 hours of flying across the world said being in the air was always peaceful and a direct contrast to the chaos on the ground.

But he said “A lot more goes on in the cockpit than you can imagine, thinking about all kinds of scenarios looking at alternates in case maybe a passenger is unwell, what do we do?

“So, we think about all these things, we look at the weather systems ahead and plan all the time making contingency plans and ultimately making the flight peaceful and comfortable for the passengers,” Captain Quainoo elucidated.

Most memorable flight
Although as a pilot he has landed at most of the airports in the world, Captain Quainoo indicated that the commemorative flight to Accra’s Kotoka International Airport in 2018 was still etched boldly on his heart.

Pointing to that touchdown as his most memorable flight and recounting with all his emotions, Captain Quainoo spoke to how he felt when he was about to land.

He said “it was the professionalism, staying focused, making sure that we achieved the task ahead. After landing and we navigated the runway onto the taxiway I gave control of the aircraft to my colleague and first officer and I couldn’t hold back the tears – I was just crying seeing all the people waving, dancing, drumming and shouting. It was just unbelievable.”

Sharing his experiences on technical issues that have arisen on the aircraft while airborne, Captain Quainoo said they were minor ones that related to the weather but then the aircraft had been built with so many redundancies that were relied on in case an instrument became faulty.

Different cultures
As a captain he most times has to superintend over a mixed cast of crew members from about 20 countries but Captain Quainoo says the training received at Emirates has prepared him adequately to work with people from different cultural backgrounds.

He singled out Japan as one of his favourite destinations because of their unique culture.

When he is not flying, he most probably can be found cycling, riding his motor bike or at the movies, he said.

“In Ghana we are currently training about 50 youth between the ages of 18 and 23 in IT and electrical technology and we get CEOs from various companies to come and talk to them and improve them,” he said, adding, “through that we managed to raise about $35,000 for someone who was going through pilot training was stuck with the money to pay.”

There is another person training in Germany as an engineer who is currently doing his internship with airbus in Hamburg, he said.

Keta: One arrested for possessing marijuana

Government will absorb all nurses and midwives – Mr Agyeman-Manu

I Will Teach Bastie Boxing Lessons In Abetifi – Sunday Ajuwa...

Coronavirus: Don’t walk in fear, have covenant with God

They can’t break me down – Angry ACP Agordzo charges