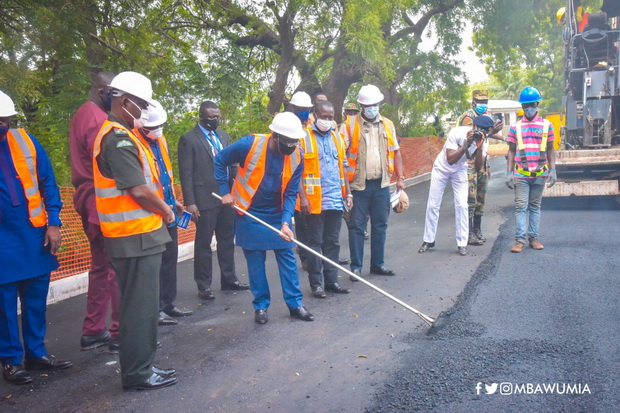 The Vice President, Dr Mahamudu Bawumia has cut sod for works to begin on the upgrading of inner roads within all the Garrisons of the Ghana Armed Forces across Ghana.

The 250 kilometers of asphalt, bituminous surfacing and reconstruction forms part of the ongoing Barracks Re-generation Project, which has seen President Nana Addo Dankwa Akufo-Addo commission among others, a 64-block housing unit at the Duala Barracks of Burma Camp, Armoured Fighting Vehicles and vehicles of all types including pickups/patrol vehicles, over 50 buses as well as several ongoing projects across all garrisons.

Vice President Bawumia re-echoed government’s commitment to resourcing the Ghana Armed Forces on Friday, 22 May, 2020 when he joined the Minister of Defence, Dominic Nitiwul, Ambrose Dery who is Minister of Interior, and Kwesi Amoako Atta, Minister for Roads and Highways, as well as Lt. Gen. Obed Akwa, Chief of Defence Staff, to signal the beginning of construction works at Burma Camp, Accra.

Vice President Bawumia recalled the President’s pledge during a durbar with all ranks of the Ghana Armed Forces in 2017 to retool all the Services, tackle the accommodation deficit, and upgrade the roads in the garrisons.

“Government is aware of the numerous challenges facing the Ghana Armed Forces including shortages and poor state of accommodation, bad roads in the barracks, obsolete equipment, among others.

“Looking back, the Ministry of Roads and Highways started the rehabilitation of roads within the various barracks in 2016. Among the barracks that benefitted were the Myohaung Barracks and Air Force Base in Takoradi; Uaddara Barracks and Central Command in Kumasi; Kamina and Bawa Barracks in Tamale and Volta Barracks in Ho.

“However, they did not touch the inner roads. Today’s short ceremony is therefore to mark the beginning of the inner roads upgrade. This will ensure that the remaining roads in the barracks have asphaltic overlay.

“The project is to be replicated in all the Garrisons. This is a demonstration that the government is not relenting on its Agenda of declaring this year ‘The Year of Roads’, even in the face of the crisis of the Covid-19 pandemic facing us,” he stated.

Vice President Bawumia continued, “This important project is not only to ensure that our vehicles are well maintained, but will provide easy access, and also beautify the barracks. I therefore urge the Contractors to ensure that high quality work is done for the roads to last. I am also happy to announce that traffic lights will be mounted at the appropriate points to ensure proper traffic control.”

The Minister of Defence, who is also MP for Bimbilla, expressed on behalf of the Ghana Armed Forces, the gratitude of the men and women in uniform for the “unprecedented investment into the Ghana Armed Forces over the past three years, running into billions of cedis”, which has seen a massive improvement in the numbers of equipment and the general readiness of the Forces to uphold and defend the territorial borders of the nation.

Kwesi Amoako-Atta, Minister for Roads and Highways and MP for Atiwa West disclosed that his Ministry was seeking a permanent collaboration with the 48 Engineers Regiment in current and future projects to ensure the general populace benefits from the expertise of the Regiment.

“I want to ensure that we have a permanent alliance with the 48 Engineers Regiment. We all know how good they are, especially in the construction of bridges. We need to work together for the benefit of the nation,” he emphasised.

The Future Of Ghanaian Youth Is Promising Under Prez Akufo-Addo –...

Give creative industry money to educate people on coronavirus – Okraku...